Corda and Real Businesses Built on Top of This Framework

Corda is a distributed ledger software for storing, managing and synchronizing contracts and agreements between different financial firms as well as individuals in a secure, consistent, and auditable manner. It was launched in 2016 by R3 together with more than 200 partners. Notably, most of the companies that support Corda are banks and financial companies. Among them are HSBC, U.S. Bank, Barclays and other credible institutions. Like other open-source projects, thousands of developers around the world contribute to the project by adding new features to the main solution.

Essentials Of The Corda Blockchain Framework

The main idea of Corda is to move from authoritative systems-of-record maintained within firms to global authoritative systems-of-record shared between all economic players. Such a system enables businesses to commit transactions directly and in strict privacy using smart contracts while notably reducing costs and streamlining business operations.

In fact, Corda is not the exact type of standard blockchain. According to the founders, it has absorbed the best features from Bitcoin, Ethereum and other networks in order to create the ideal platform for a highly specialized purpose: to manage financial agreements between regulated financial institutions (this was stated by R3 CTO Richard G Brown). So, let’s get a more clear understanding of the particular qualities of Corda by comparing it with other popular open-source projects – Hyperledger and Ethereum.

According to the organization, Corda is aimed to assist the other sectors such as

Keeping that in mind, let’s take a look at some examples of Corda’s implementation in real companies.

CryptoBLK is a Hong-Kong fintech company that provides companies with DLT-based financial solutions. In 2018 CryptoBLK in cooperation with R3 and HSBC created a Corda-based letter of credit platform. Using the platform, HSBC and ING executed the world’s first letter of a credit transaction on a blockchain platform for Cargill. The transaction took less than 24 hours. Now, CryptoBLK is working with R3 to engage more banks to the platform to spread this solution to the world. 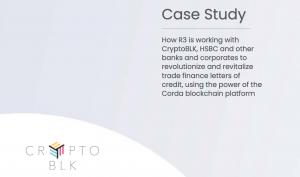 Corda Enterprise and CryptoBLK testimonial on building a trade finance CorDapp to revolutionize and revitalize trade finance letter of credit. 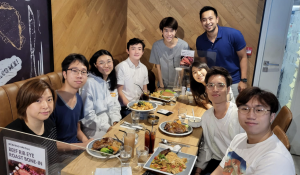 CryptoBLK launched an internship program to nurture more talents in Blockchain and for the FinTech industry at large.